Dear Readers, Chione and I will not be on the water for a while.

While out sailing on Saturday 4 September, Chione’s mast snapped at the lower mast band. I was very fortunate that I managed to get all her sails down, recover the rigging and motor back to King Point Marina and while the incident itself was a shock, and I am disappointed not to be able to get out sailing, the important thing is that Chione herself is undamaged and I am hoping to be able to get a new length of mast scarfed into the remaining part of the mast. I suspect repairs will take a while and I will be lucky to be back on the water before the New Year. If anyone has any recommendations for wooden mast repairs (or at worst build a new mast) in the Plymouth area, please do let me know.

While the incident unfolded a bermudan sloop stood by me. In the kerfuffle of getting sorted out I never got her name. If her crew happen to read this post, I am eternally grateful to you for taking time out of your passage to ensure that I was ok. Thank you.

Saturday 28 August was a great day sail to the Eddystone Lighthouse. The wind was light NE to start with but increased and became a little more Easterly as we headed further offshore. Speed through the water was generally between 6 – 7 knots with winds between Force 4 – 5. On the way out we saw two pods of dolphins and the arched back and fin of what may have been a pilot whale (but I can’t be sure as the sighting was brief). Despite having the mackerel line out all the way to the Lighthouse and back (it was hauled in when the dolphins were in sight), no fish were caught – just lumps of seaweed!

It was a blustery day as I headed out of King Point Marina with winds from the NE, so I decided to set Chione on a broad reach and settle down for a comfortable sail without actually heading to anywhere in particular. After a couple of miles heading directly out to sea I decided to tack back towards the shore and into Wembury Bay. The tide assisted and I managed to sail into the centre of the Bay, heading directly for St Werburgh’s Church. With the wind blowing directly from the mouth of the Yealm, I dropped all sail and decided to motor in to explore. The channel to avoid the bar is well marked and thereafter, despite a couple of anchored yachts, it was easy to follow the leading marks. As expected, the River was busy with only a few moorings available – mostly in shallow water. I headed up the River past the moorings before turning around and heading back to sea.

It was now lunchtime, so I unfurled only the jib and had a slow sail past the Mew Stone before hoisting the main and making good progress back to Plymouth Harbour without the stay sail. The River Yealm looked beautiful; definitely somewhere to visit again and hopefully find a mooring when there are less visitors!

Mon 16 Aug was intended to be a quiet shake-down sail to check that everything had been re-rigged correctly and was working as it should. After motoring out of King Point Marina and through the Bridge to the West of Drake’s Island, I tried both the staysl’ and jib to make sure they were unfurling and furling correctly. The wind was much stronger than I expected and I imagine it was funneling off the hills above Cawsand and down the Tamar. Once the staysl’ and jib had been proven, I turned head to wind and hoisted the main, It was obvious that a reef was needed, so the 1st reef went straight in. Once the main was set and the staysl’ and jib were unfurled, the engine was stopped and Chione charged off towards Cawsand at between 6 – 6.5knts. It was exhilarating sailing, although not quite what I’d planned for her first outing in Plymouth! Having passed Penlee Point, Rame Head was next with the prominent small chapel on the top. By now the wind had become quite blustery with the highest gust reading 31knts on the anemometer, with constant winds at the top end of F5. The top speed logged was 7.1knts – not bad for a small gaffer! I decided to turn for home and enjoyed a fast sail back to the Bridge, where sails were lowered, fenders tied-on and I motored back into King Point Marina. An excellent start and I’m looking forward to exploring in and around Plymouth much more in the coming months.

Chione was finally back together and ready to sail on Sat 14 Aug. The previous weekend had been too windy to bend on the mainsail, so this had to be done last. I always find the lazy-jacks a challenge to re-rig, despite taking pictures of them in Whale Island prior to de-rigging and marking them for reference later on. I also managed to get a twist out of the jib halyard which resulted in the last few inches of the halyard twisting at the mast-head making it very difficult to sweat the halyard up tight as the twist caused fiction and prevented the last few inches of halyard passing through the block. By inducing a clockwise twist to the halyard fall and then drawing the fall back through the block, the twist at the block has gone. Maybe this is common knowledge, but I have found out by trial and error!

After a busy weekend, Mon 2 Aug 21 was launch and mast re-step day. Sunny and dry with light wind, everything went to plan. Chione was in the water by 0900 and on the Queen Anne’s Battery crane dock for just after 0930. Once the mast was stepped, I spent some time securing Chione’s running rigging and reconnecting the electrics – fortunately everything worked first time, including the VHF! I’d wrapped all the plugs in individual freezer bags, sealed with a cable tie and they’d all remained dry despite some torrential rain over the past 2 weeks. Even so, I still gave all of the plugs a clean and squirt of WD40 prior to assembly.

Once out of Queen Anne’s Battery, it was a short journey West along the Hoe to King Point Marina which is accessed via the Continental Ferry dock. No ferries today, so there were no problems with getting alongside. Now the work starts to bend on the sails and get on top of the neglect (mainly varnish work) of the past 18 months!

When I moved from Hampshire to Cornwall nearly two years ago I had intended to keep Chione in her home marina of Whale Island (Portsmouth) and have alternate weekends sailing, spending non-sailing weekends at home. Coronavirus rather put pay to that plan, and coupled with work commitments, it became apparent that moving her closer to home was the only option that would allow me to sail regularly and keep on top of maintenance. The first lockdown did nothing for Chione and her varnish work has suffered somewhat; the poor weather hasn’t helped either, but I hope to address varnish work over the coming months.

So, over the weekend of 17 and 18 Jul I took Chione up to Port Solent Marina, Portsmouth and de-rigged her ready for mast un-step and lift to transport on Mon 19. I used the same company who brought her down from Scotland in 2018 to haul her to Plymouth. She was even on the same trailer! I can’t speak highly enough of South West Boat Transport – no relation or business interest – they purely did a good job! Chione will be launched on Mon 2 Aug at Queen Anne’s Battery Marina, Plymouth and once her mast is stepped I’ll take her round the corner to her new home in King Point Marina (by the Continental Ferry Port).

It has been a wrench leaving Whale Island after nearly 30 years, but I am very much looking forward to exploring the Devon and Cornwall coastlines as well as Plymouth harbour.

Give me a wave if you see me out sailing!

After so much rain there was a weather window of 24hrs that looked like it would be dry!  When I left Portsmouth at 1030 on Tue 15 Oct there was very little wind and poor visibility.  Motoring towards Gilkicker Point, Jolie Brise was anchored off Haslar with crew members taking a swim – the sea temperature was about 16C!  Not much wind all the way to Cowes, so the engine and autopilot did most of the work.  A heavy shower off Norris Castle was a disappointment as it has started to brighten up.

I have always enjoyed visiting Cowes – especially when it is quiet – and this visit didn’t disappoint.  Initially the Visitors’ area of Shepards Wharf Marina was empty, until a couple of sail training yachts arrived at about 1630.  A walk into town and along the front to Gurnard was enjoyable and warm enough to wear just a t-shirt.  I also located The Coast Bar and Dining Room where I had arranged to meet a good friend for drinks.  A really enjoyable evening followed – definitely good to catch up and put the world to rights.  I can recommend the Coast Bar – really friendly, great atmosphere, and they do a good pint of cider!

The return trip to Portsmouth was wet and windy.  Experimented with sailing under just jib, then jib and staysail, and eventually also hoisted the main to make the most out of the conditions and have a good return sail.  Already looking forward to the next visit to Cowes!

Heading into Cowes via the Eastern Channel:

Had a great day sailing to the entrance of the Beaulieu River and back to Whale Island.  The forecast Northerly was more NNW, but with a smooth sea and not too many other yachts out, I managed to get to Beaulieu in one starboard tack from Gillkicker Point.  Just off Cowes the gaff ketch ‘Queen Galadriel’, owned by the Cirdan Trust, passed by heading East. By the time I turned for home the tide was flooding and the trip from Beaulieu entrance to Portsmouth Harbour entrance was completed in just an hour.  Great Sailing and Chione going well. 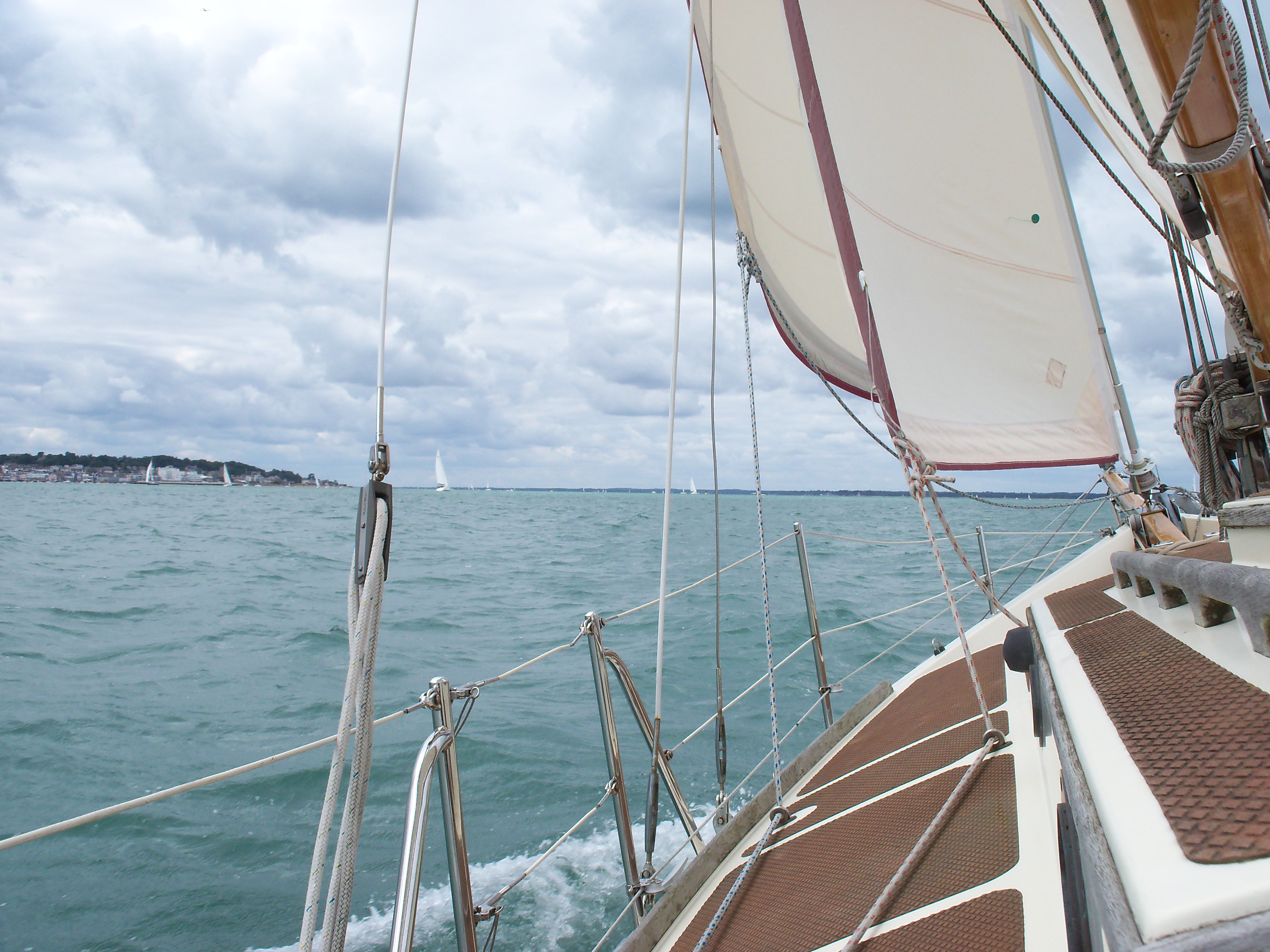 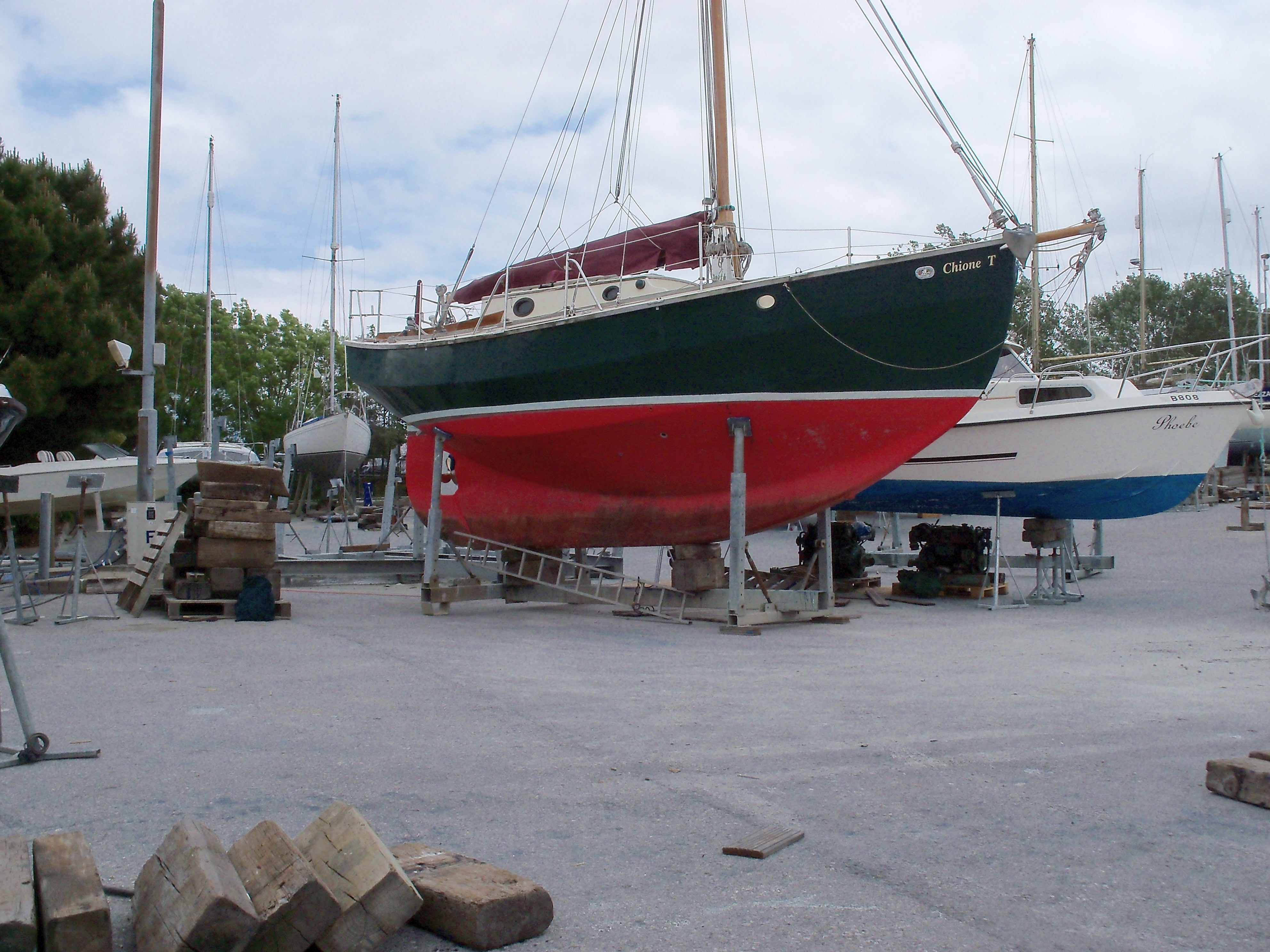 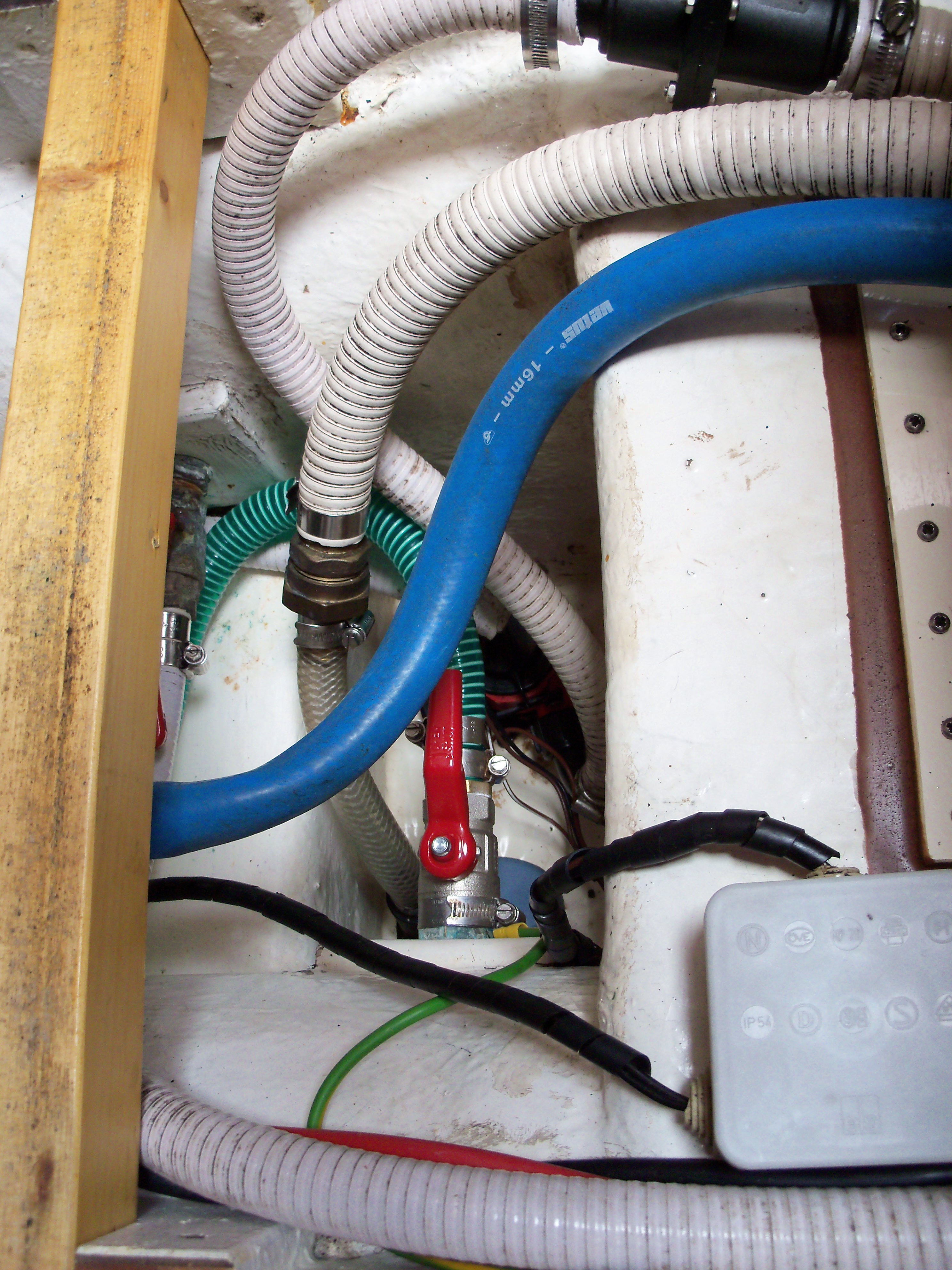